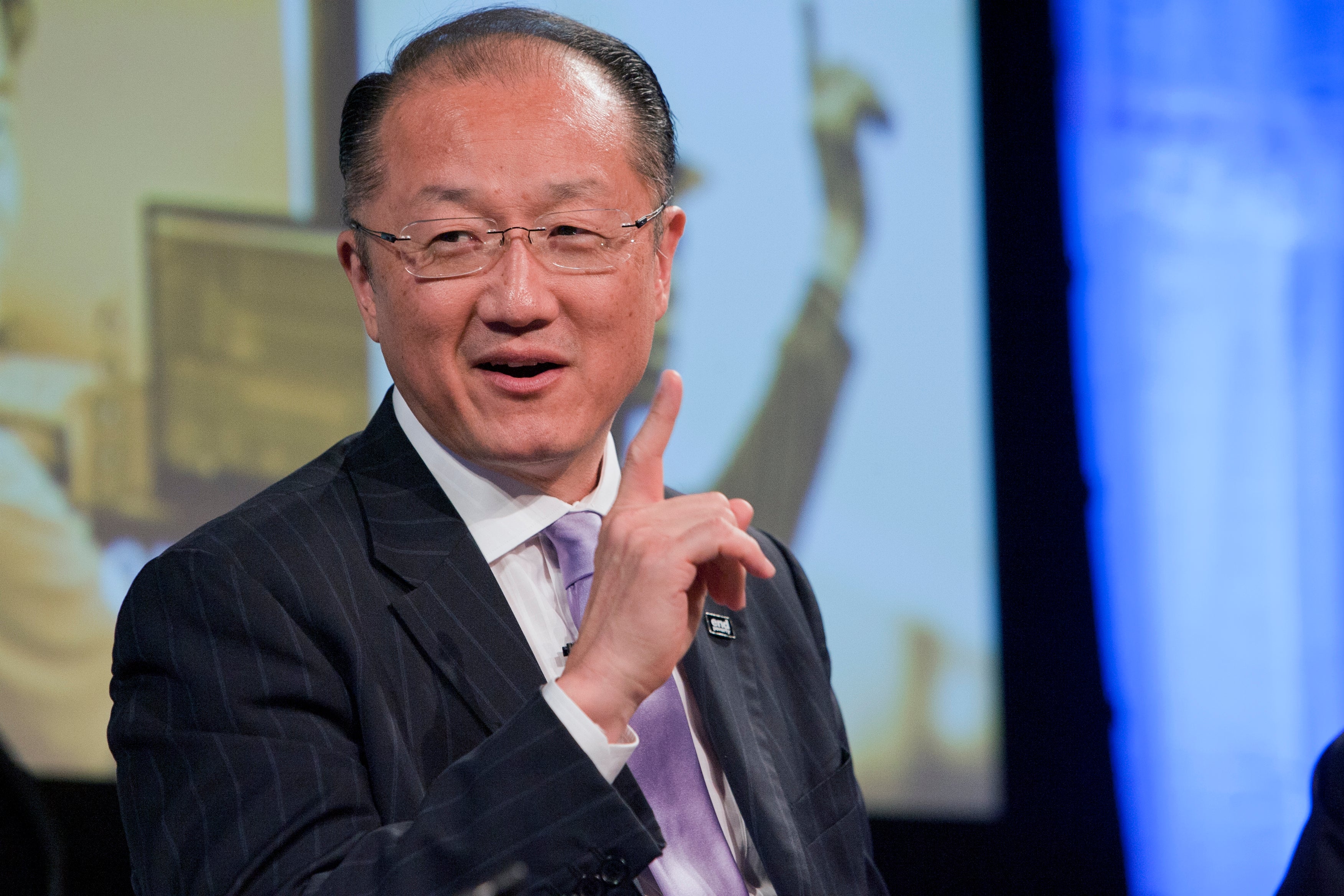 World Bank/Simone D. McCourtie
Originally posted on the website of the World Bank Group on December 16, 2015.

Good morning. I’m extremely grateful to Prime Minister Abe, Professor Takemi, and the Government of Japan for the honor of addressing you today.

Prime Minister Abe and the Japanese government’s strong leadership on our shared commitment to universal health coverage has been critical in advancing the freedom, fulfillment and capabilities of all people, especially the poor and the vulnerable.

I’m so encouraged to see all of you here for this important conference. I’m also grateful for Japan’s dedication to this issue because we must acknowledge that the journey to this point for universal health coverage has been difficult. At Alma Ata in 1978, world health leaders committed to provide health for all by the year 2000, emphasizing the needs of the poorest countries. But we all know that we have fallen far short of those expectations.

After Alma Ata, many organizations, including the World Bank, believed this comprehensive approach was too expensive and unfocused. The international community turned instead toward targeted campaigns and initiatives, including increasing childhood vaccinations and treating some of the world’s most deadly infections, often with very positive results, such as those shown by The Global Fund to Fight AIDS, Tuberculosis, and Malaria.

While some developing countries built stronger health systems, many others remain unable to provide these basic health services that are critical to people’s well-being."

Today, the support and commitment for universal health coverage has never had such momentum. Several organizations, including the World Bank Group, are working with countries to strengthen their health systems. Research couldn’t be clearer about the benefits of investments in health – the Lancet Commission for Investing in Health found the economic return in developing countries could be as high to 10 to 1.

We would not be in this position today without Japan’s leadership. In 1961, Japan established universal health coverage, or UHC – a remarkable achievement for a post-conflict country. Ever since, Japan has shown the world the importance of universal health coverage to peaceful and healthier societies. Japan’s advocacy was a major reason that UHC is a target of the Sustainable Development Goals.

Japan also has played an important role in the progress we’re making on two fundamental challenges to UHC -- affordability of care and access to basic services. Two years ago here in Tokyo, I announced that the World Bank Group and the World Health Organization would collaborate to pursue two ambitious targets:

These targets will be difficult to reach, but I’m confident we will succeed. We and other development partners are already working together in important ways to make progress toward UHC.

The Primary Health Care Performance Initiative, with strong support from the Bill and Melinda Gates Foundation, will help developing countries track key performance indicators for primary health care, identifying parts of the system that are working well and ones that aren’t."

The Global Financing Facility for Every Woman Every Child will accelerate efforts to end preventable maternal and child deaths by 2030. This country-driven partnership will catalyze greater investments in frontline health services and preparedness by increasing grants and low-cost financing. The facility also will help countries access additional private financing and World Bank loans at very low interest rates.

The Global Financing Facility also links to IDA, the World Bank Group’s fund for the poorest countries, helping to make even more funding available for health system strengthening. IDA is already our largest source of support for health in developing countries – with $4.9 billion dollars in new IDA financing for health in the last three years alone. Leaders from developing countries tell us that IDA financing is one of their most effective sources of donor assistance. Generous contributions to IDA from Japan and other countries have brought quality, basic health services to the world’s poorest people and improved their resilience to crises.

The international community also can greatly accelerate progress toward universal health coverage by rebuilding our global health architecture to ensure a faster, more effective response to public health crises. But after the H1N1 pandemic, as in past pandemics, we followed a traditional pattern of panicking during a time of emergency – and then neglecting the problem once it had passed.

This cycle of panic and neglect is deadly. The failure to build strong health systems in Guinea, Liberia, and Sierra Leone led to the world’s largest ever Ebola epidemic, killing more than 11,000 people and causing billions of dollars in losses to the rapidly growing economies of these West African nations.

We hope to mark the end of Ebola in these countries sometime soon, but we must not forget what happened – we must prepare for future pandemics now. Experts predict that it’s very likely that sometime over the next 30 years we will face a severe pandemic like the 1918 Spanish Flu, which would have the potential to kill as many as 30 million people in 250 days – and reduce global GDP by roughly 5 percent, or close to $4 trillion dollars.

The UN High Level Panel report on Ebola and other expert reviews will help us improve pandemic response and preparedness. At the request of the G7 and G20, the World Bank Group, the WHO, and other partners are building a comprehensive response.

A critical part of the response we’re developing is called the Pandemic Emergency Financing Facility. The facility aims to eliminate financial constraints for a swift and effective response to an outbreak, using pre-arranged public and private financing, including resources from insurance and capital markets. We are hopeful that once it’s fully functional, this facility will save lives and protect economies.

This financing facility will be an essential piece to a much broader framework for managing pandemic risks. The international community must now increase investments in data reporting, disease surveillance and outbreak preparedness. We must have a strong and well-funded WHO, and the reforms underway to strengthen its emergency response capacity are a great start. We must fully fund its Contingency Fund for Emergencies, which will complement the Pandemic Emergency Financing Facility. And the review of the International Health Regulations should result in a permanent shift from a voluntary, subjective, self-reporting assessment process to one that is mandatory, objective, and verifiable.

In addition, we need a way to hold all of us accountable. We must create a new international mechanism that will be apolitical, technical and independent of countries, institutions or funders. It should have the mandate, funding and authority to evaluate the preparedness and response plans of governments, international institutions, the private sector, civil society, and communities. This group of trusted experts – who would tell the unvarnished truth to the highest levels of the global system – must be empowered to call for action from the entire pandemic response community. Embracing full transparency and accountability may make us uncomfortable, but it’s precisely that discomfort that will put us on the right path.

When I was young, thanks to my mother’s influence, I often read the speeches of the American civil rights and anti-poverty hero Dr. Martin Luther King. In one of my favorite passages, Dr. King wrote:

We are confronted with the fierce urgency of now. In this unfolding conundrum of life and history, there ‘is’ such a thing as being too late. This is no time for apathy or complacency. This is a time for vigorous and positive action."

Japan’s G7 Presidency and the Isay-Shima summit next May is our moment for vigorous and positive action. It is our opportunity to finally act on the unfulfilled promise of Alma Ata, and move rapidly toward universal health coverage -- and to prepare ourselves before the next pandemic hits. Accomplishing these twin goals will represent a quantum leap forward in people’s health and economic wellbeing.

We have no time to waste. As Dr. King said, we only have the “fierce urgency of now.” Let’s seize this opportunity together. Thank you very much.

Jim Yong Kim is the President of the World Bank Group.